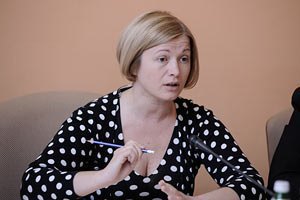 Ukraine's representatives at the trilateral contact group on a Donbas settlement have handed over to the OSCE the list of 114 Ukrainian nationals held captive by pro-Russian militants, and 684 missing persons, Ukraine's envoy at the political subgroup, Iryna Herashchenko, has said.

"Once again we have handed over to the OSCE and another party the lists of people held captive by the militants (the list contains the names of 114 persons, including civilians and servicemen, held exclusively in the separatist-controlled areas, and does include political prisoners held in Russia). Our inquiries have once again fallen on deaf ears," she said on Facebook.

Over the year, Ukraine has filed 58 such inquiries and only received seven replies which did not specify where and why Ukrainians were held.

The trilateral contact group met in Minsk on 6 April, however no specific results were achieved.