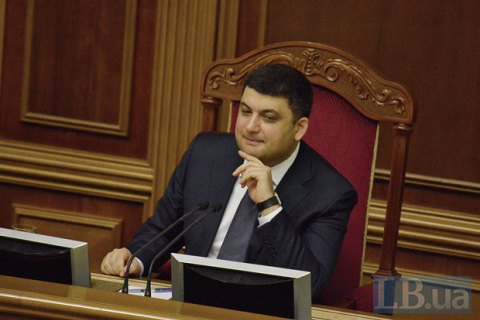 Parliament speaker Volodymyr Hroysman, who is tipped to be the top candidate for prime minister of Ukraine, has said a new cabinet may be voted on Thursday, 14 April.

"We need to get together today, hold a meeting of the coalition and get prepared for tomorrow to vote on a new government, adopt a programme of action and re-elect the leadership of the Verkhovna Rada [Ukrainian parliament]," Hroysman said at the opening of the session on 13 April.

At the same time, he admitted that the participants in the night negotiations failed to reach a compromise on the format of a new government.

"I believe we have reached an agreement regarding the format that should get the support of the factions of the current coalition," he said.

Hroysman posted a statement on his Facebook page in which he sated preparedness to head the government.

"I understand that the situation we are in is utterly grave. I do realize that the responsibility is huge, and the task and challenges the government is facing are devastating. But I also know that with your support, the support of Ukrainians, we shall honestly work and do everything we can to pull the country out of this crisis. To do this we need the support of both Petro Poroshenko Bloc and People's Front," he said.