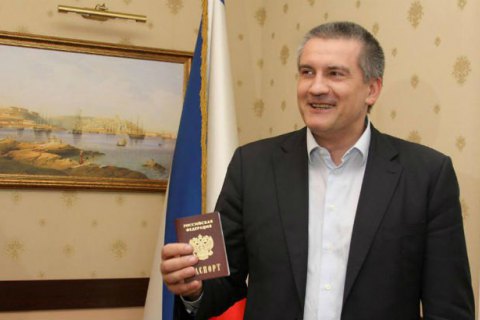 Serhiy (Sergey) Aksenov has been announced suspect in a criminal case concerning the illegal alienation of the state-owned International Children's Centre Artek, the press service of the Prosecutor-General's Office (PGO) has said.

"In view of the evidence collected in the case of the so-called head of the illegally established organ, the Council of Ministers of the Republic of Crimea, S. Aksenov, who abused his official position in violation of the legislation of Ukraine and illegally took possession of the property of the above, a state enterprise of Ukraine, in favor of a third party - the Russian Federation, the Prosecutor's Office of the autonomy announces suspicion of committing a crime under Article 191 part 5 of the Criminal Code of Ukraine," the PGO said on its website.

The Kiev-based prosecutor's office of the Crimean autonomy announced suspicion to Aksenov back in September 2015. Artek included the land area of 218 ha, 175 buildings, a sea pier, a 7,000-seat stadium, a car park, furniture, computers etc. "The Council of Ministers of Crimea" transferred all this property into possession of the Russian Federation on 31 March 2015. Ukrainian prosecutors, in response, opened criminal proceedings.