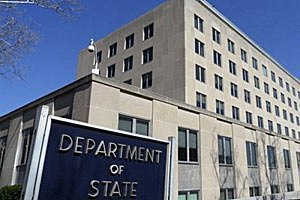 Photo: topwar.ru Bureau of Democracy, Human Rights and Labor in the US Department of State has published an annual report on the human rights situation in the world in 2015.

The section devoted to Ukraine focusses, first and foremost, on breaches committed by Russia- backed separatists. A special chapter describes situation in Crimea.

"The separatists systematically are engaged in kidnapping, torture and illegal detention. To a lesser degree, there also are similar reports on the part of government authorities. Separatists have used children as soldiers, and limited access to humanitarian assistance," the report says. In addition, the government of Ukraine is accused of suppression on freedom of movement. Internally Displaced Persons (IDPs), the document says, have faced difficulties in obtaining legal documents, education, pensions and access to financial institutions and healthcare.

Secondly, it is noted that in the Crimea, the Russian occupation forces committed numerous violations of human rights against ethnic and religious communities, in particular Crimean Tatars, as well as independent journalists and all those who are perceived as opponents of the occupation regime.

"Third, the country has suffered from corruption and shortcomings in the administration of justice. Human rights activists and the United Nations noted that the investigation of human rights violations committed by law-enforces, are rare. In particular, the Security Service of Ukraine and the Ministry of Internal Affairs acted with impunity. Corruption in the Prosecutor General's Office and the judiciary is of particular concern,"- the report says.

Other problems reported during the year included abuse of persons in custody, in particular beatings and alleged torture of detainees and prisoners; harsh conditions in prisons and detention facilities; a corrupt judicial system; societal violence against women and abuse of children; societal discrimination against and harassment of ethnic minorities; trafficking in persons; discrimination toward persons with HIV/AIDS that endangered their prospects for treatment; limitations on workers' right to strike, and forced labor.

"The government generally failed to take adequate steps to prosecute or punish most officials who committed abuses, resulting in a climate of impunity. The overall climate, however, improved after Yanukovych fled the country in February. Authorities opened investigations into the events of the Maidan shootings in February and riots in Odesa in May, but they remained incomplete and continued at year's end," the US Department of State observes.