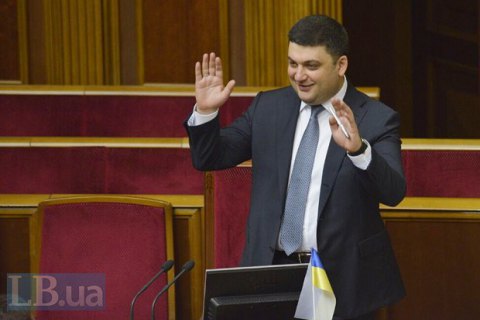 The decision was adopted by 257 MPs, including 131 MPs of the Petro Poroshenko Bloc and 75 MPs of the People's Front. It would not have been passed, had it not been for the support of the People's Will group (16 MPs), the Revival group (23) close to tycoon Ihor Kolomoyskyy and 11 unaffiliated MPs. Also, Artem Vytko, formally a member of the Radical Party faction, cast his vote in favour of Hroysman.

Nominating Hroysman for prime minister, President Petro Poroshenko has praised him as a worthy candidate and an experienced manager.

"Volodymyr Hroysman is politician of the new generation. By your decision, he will become the youngest prime minister in the history of Ukraine. And still, Volodymyr Borysovych has huge managerial experience. I can testify that he is one of the best mayors of regional centres with a top level of public support. As deputy prime minister and minister of regional development he was a top-class manager in charge of decentralization reforms. The chairmanship of parliament was not easy either," Poroshenko said in parliament on Thursday, 14 April.

Hroysman, 38, was the mayor of Vinnytsya in 2006-14, after which he was appointed deputy prime minister and minister of regional development and construction.

In November 2014, he was elected to parliament, of which he became the speaker.