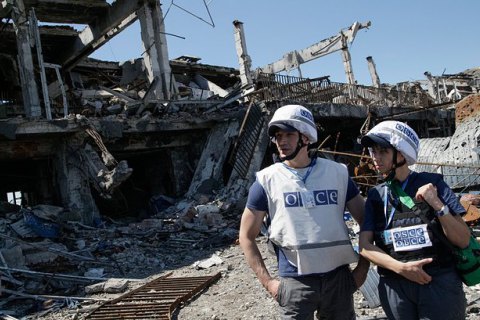 Russia agrees with the proposal of Ukraine to place the OSCE police mission in Donbass, Russian President Vladimir Putin said during the annual televised conference.

"Recently I had a conversation with Petro Poroshenko: he proposed to strengthen the presence of the OSCE [in Donbas], including armed OSCE personnel to be deployed along the demarcation line, and thus achieve a full ceasefire. I think this is the right idea," he said.

Putin said the West should work out and formalize the idea of the expansion of OSCE mandate.

Ukraine earlier stated the desire to deploy armed OSCE personnel both at the demarcation line and along Ukrainian-Russian border. President of Ukraine Petro Poroshenko only such an expansion of OSCE mission will make local elections at the so-called DNR and LNR possible.

In response, leaders of the militants in the Donbas threatened to launch a full-scale war in the event the OSCE police mission will be deployed in the ATO zone.