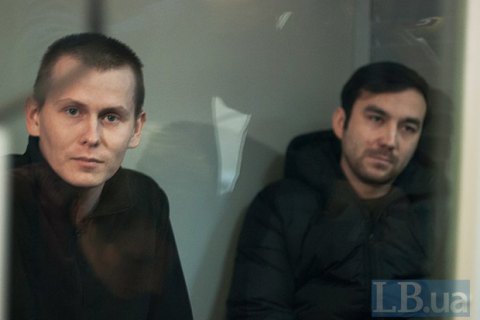 Prosecution wants two Russian military intelligence (GRU) officers Aleksandr Aleksandrov and Yevgeniy Yerofeyev be imprisoned for 15 years with confiscation of property for having committed grave crimes on Ukrainian territory, including aggressive war and an act of terrorism, which has inflicted deaths.

Participating in the pleadings, prosecutor Ihor Nimchenko said that the fact that Aleksandrov and Yerofeyev are Russian officers who were committing their commander's order raises no doubt and has been completely proven.

"There are full confirmations of the fact of aggressive war by Russian special operations forces… The professional servicemen were executing the order of their command to conduct the aggressive war," he said.

"I ask that Yerofeyev be found guilty of committing the crimes with the punishment assigned as 15 years in prison. With confiscation of property," representative of the state prosecution Maksym Krym said.

The prosecutors demand the same punishment for the other Russian serviceman Aleksandrov.

In keeping with Ukrainian law, lawyers for the defense and prosecution will make closing arguments, followed by final statements from the defendants. The judges will then recess to their chambers to formulate their verdict.