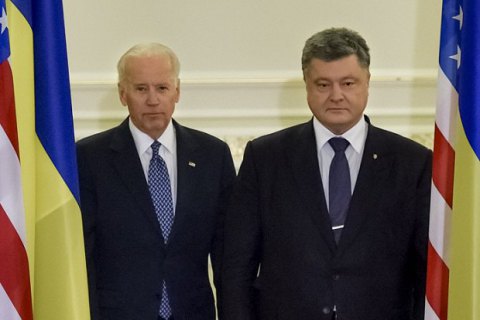 President Petro Poroshenko in a telephone conversation with U.S. Vice President Joseph Biden discussed the implementation of reforms in Ukraine by the new government, the situation in Donbas and the state of serviceperson and MP Nadia Savchenko detained in Russia.

Biden, according to presidential press service, praised the formation of the new coalition in the Ukrainian parliament and the government by Prime Minister Volodymyr Hroysman.

Poroshenko emphasized that the new government would continue reforms, cooperate with the IMF and fulfil the Minsk agreements. In this context, Biden assured that the United States would further support Ukraine.

"In particular, the parties agreed that an agreement on the issue of the third tranche of credit guarantees in the amount of $1 billion will soon be signed," reads the report.

The parties noted the importance of struggle against corruption in Ukraine and a prompt appointment of a new prosecutor general.

Poroshenko also informed the U.S. Vice President about the deterioration of the situation in Donbas and noted the trend towards an increase in the number of attacks on Ukrainian positions on the part of fighters controlled by Russia.

Biden condemned the escalation by pro-Russian militants and expressed support for the Ukrainian side's approaches to resolving the conflict. He also assured of Washington's constant support for the restoration of Ukraine's territorial integrity and sovereignty.

"Poroshenko and Biden once again called on the Russian leadership to immediately release Savchenko whose state of health is deteriorating as a result of a dry hunger strike," reads the report.