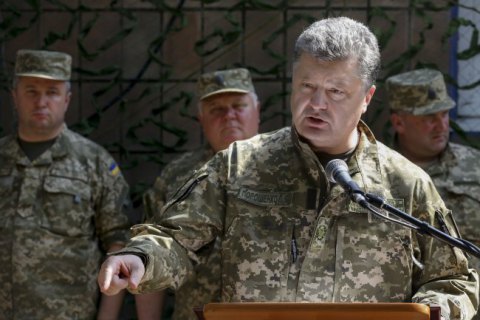 President Petro Poroshenko is going to reduce the number of generals' posts in all uniformed agencies.

Head of state said on his Facebook page that he had ordered the Ministry of Defense, Ministry of Interior, Security Service, the State Border Service, the National Guards, Foreign Intelligence Service, the Office of the State Guard and Emergency Situations Service to look into the ratio of posts of senior officers (generals) to the total number of military personnel and submit proposals to reduce the number of command staff.

The Euro-Atlantic model of control of military formations, Poroshenko points out, involves maximum transfer of powers down the line of command to middle- and lower level officers

"Ukraine is conducting a sweeping reform of the security sector and defense. We are not just updating the materiel, but first and foremost the command staff. The young officers proved their right to command the army in the field," the FB posting reads.

In late March, Poroshenko made generals ten officers on the occasion of the Security Service Day (25 March) and the National Guard Day (26 March).