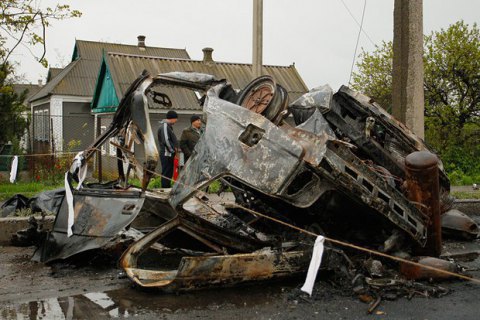 The secretary of Ukraine's National Security and Defence Council, Oleksandr Turchynov, has said the shelling of Olenivka that killed four civilians on 27 April was a provocation by militants of the self-proclaimed Donetsk People's Republic (DPR).

In a statement, Turchynov cited several pieces of circumstantial evidence: the day before a group of Russian journalists arrived in Donetsk, who organized a live broadcast of Olenivka immediately after the shelling; on 26 April, militants artificially created queues at the checkpoint near Olenivka; DPR official Eduard Basurin had spoken of the possibility of artillery shelling in Olenivka in advance.

"Irrefutable facts and evidence by local people clearly indicate that the shelling of civilians was held from the area of the filter station near the village (northwest outskirts of Dokuchayivsk (47 ° 47'28.7" 37 ° 37'59.4 ")), which is on the territory controlled by the militants, at a distance of around 4 km from the place of the tragedy," the statement reads.

Turchynov also provided some evidence to support the fact that the Ukrainian government troops are not responsible for the shelling.

First, neither Ukrainian nor Russian observers reported any shelling of Olenivka by the Ukrainian army on the night of 27 April. Second, the Ukrainian military has never used artillery in the area.

"Thus, the facts dismiss the accusations by Russian propagandist media of the alleged involvement of the Armed Forces of Ukraine in the death of people in Olenivka and thus testify to the implementation of a complex set of provocations and a bloody terrorist attack by the Russian occupation forces and illegal armed groups. The incident was aimed at discrediting the ATO forces and served as a smokescreen for further military escalation of the conflict," Turchynov underscored.