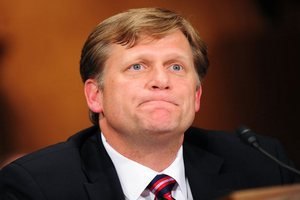 The United States must restrain Russia and respond to its action, former US Ambassador to Russia Michael McFaul has said in an interview with the Estonian newspaper Postimees.

Russia's actions have forced NATO to deter its threats, McFaul, said. He expressed confidence in the legitimacy of NATO enlargement to the east and recalled that NATO did not promise not to take in new members.

The former ambassador also accused Russia of annexing Crimea and undermining Ukraine's economy, and called on the Western countries to take measures to counteract this. America and Europe have taken important steps to help Ukraine. Putin hopes that democracy in Ukraine will collapse because of the economic hardships, and, for his part, is doing everything to make this happen as quickly as possible. The West should make every effort to prevent this from happening, said McFaul.

The US diplomat said that Moscow's policy, in the first place, had caused harm itself. He said he hoped that the Russian society will sooner or later realize the harmfulness of today's foreign policy.

In late May, NATO called the potential threat posed by the Russian Federation as "real and serious".

Earlier, the European members of NATO for the first time in almost a decade decided to increase defence spending in response to the growing threats, including the migrant crisis and the Russian aggression.