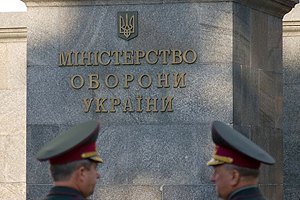 The Defence Ministry's press service has denied as incorrect the reports about numerous combat losses among Ukrainian troops in Donbas last night.

"The information published by Ukrainian MP Yevhen Deydey on Facebook about numerous combat losses in the Ukrainian Armed Forces in the course of this night has no substance!" the statement reads.

"According to the verified reports, over the past 24 hours (as of midnight) none of Ukrainian servicemen has been killed but 12 have been wounded. All the servicemen are being provided urgent medical help. Also, according to preliminary reports (as of 14:00 Kyiv time on 12 June), the losses of the antiterrorist operation forces last night were as follows: three servicemen were wounded," the Defence Ministry said.

The ministry insists there are no other military units in the security operation area except for the Armed Forces of Ukraine.

MP Deydey earlier said on Facebook that four Ukrainian servicemen were killed and 13 wounded in the early hours of 12 June.

ZN.ua quoted volunteers as saying that some of the buildings of the Butivka mine collapsed as a result of the militants' night attack.

The spokesman of the presidential administration for the antiterrorist operation, Oleksandr Motuzyanyk, said that 12 Ukrainian servicemen were wounded on 11 June.