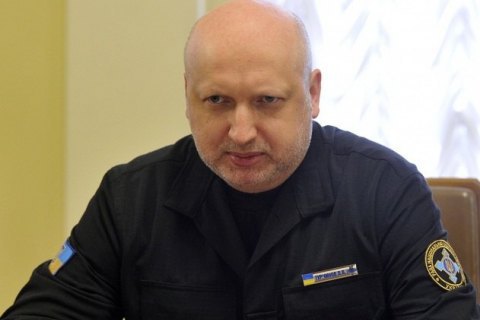 Turchynov said that, in order to work out new advanced firing and spotting technology, the occupiers use unmanned aerial vehicles (UAVs).

"They are launched from the occupied territories, as well as directly from the Russian Federation. This is modern Russian equipment. Often, our positions are monitored by a trio of UAVs: one responsible for visual reconnaissance, another revealing communication and control systems as well as radar systems for their radio-electronic suppression. The third UAV adjusts artillery fire or attacks if it’s a combat UAV," said Turchynov.

Besides the prohibited caliber artillery, another serious problem for the Ukrainian army constitute professionally trained snipers and subversive groups, staffed by Russian special forces. Turchynov says this stays behind the increase in casualties among the Ukrainian troops: in May, the AFU suffered the greatest losses since year-start. 25 soldiers were killed and another 98 were injured.

"The reason was demonstrative aggressiveness in the operations of the occupation forces, consistency and well-preparedness of provocations. We are not yet seeing a sharp increase in the number of attacks – there is an average of 30-50 attacks a day, but the approach of the occupiers to carrying out the shelling has changed dramatically. At the beginning of 2016, it was often chaotic and random, aimed only in the direction [of our positions], but since the end of April, there has been mostly target shelling of our positions with large-caliber mortars, artillery and multiple rocket launchers, banned by the Minsk agreements," said Turchynov.

Earlier, commenting on the situation in Donbas, Turchynov said that Russia set up a "Black May." "May was “black” for us, because we in the last month, we suffered the greatest losses in the last year. We lost a lot of our heroes, and many more were wounded," he said.