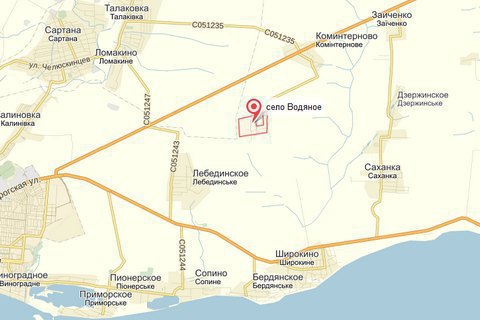 The OSCE Special Monitoring Mission (SMM) travelled to government-controlled Vodyane (94 km south of Donetsk) in a visit that had been co-ordinated with representatives of the Joint Centre for Control and Co-ordination (JCCC), OSCE said in report on 23 June.

At 11:18 the SMM was conducting a foot patrol and speaking with a couple at their house when the village was hit by seven mortar rounds assessed as 82mm calibre.

The SMM and Ukrainian Armed Forces, including a Ukrainian representative from the JCCC, took cover in a house. The SMM immediately contacted members of an SMM mirror patrol in “DPR”-controlled Kominternove (23km north-east of Mariupol), which was escorted by a Russian Federation Armed Forces representative to the JCCC, to try to facilitate a ceasefire. After 15 minutes, when the situation was assessed as safe, the patrol members left the house and proceeded to the two SMM armoured vehicles, parked approximately 70 metres west of the house. At this time, the patrol heard two more explosions assessed as mortar rounds impacting in the village, which caused the patrol members to lie on the ground before reaching the vehicles safely.

During the entire time the SMM patrol drivers remained in the vehicles. From there, they observed one impact at an approximate distance of 100-150 metres north and another at a similar distance to the south-east. One round caused a house in the south-west part of the village to catch fire; the house was burning fiercely when the patrol left the village. The patrol returned safely to its base in Mariupol at approximately 13:00.