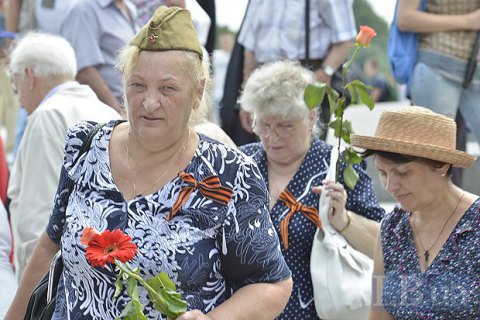 On 22 June, opposition forces rallied in Kyiv's Park of Eternal Glory on the 75th anniversary of the attack of Germany on the USSR during the Second World War.

The event was organized by a Kyiv organization of veterans. The representatives of the banned Communist Party of Ukraine, led by Petro Symonenko, Progressive Socialists by Natalya Vitrenko, Ukrainian Choice by Viktor Medvedchuk. The activists of Ukrainian Choice were protected by individuals in T-shirts with the logo of the detective and security company Svarog, known to be associated with Viktor Medvedchuk.

The participants of the rally were wearing St. George ribbons, red flags, icons of the Russian Tsar Nicholas II, banners, and portraits of Soviet figures Georgiy Zhukov and Lavrentiy Beria.

Earlier in the day, the same place was the scene of official events attended by President Petro Poroshenko, Prime Minister Volodymyr Groysman, the Verkhovna Rada Speaker Andriy Parubiy, members of the Cabinet.

Participants of the ceremony honored the memory of war victims with the minute of silence before the Eternal Flame. Completed ceremony march the guard of honor of President of Ukraine.

Ukraine marks 22 June as the Day of Mourning and commemoration of the victims of war.