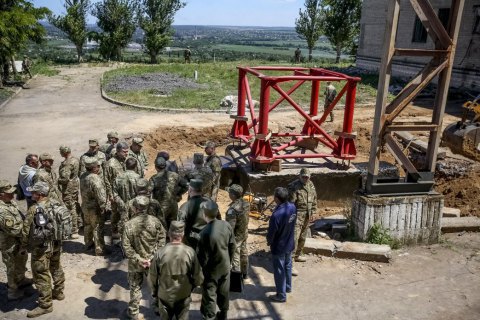 President Petro Poroshenko has said the Kramatorsk TV tower on the Karachun Mountain in Donetsk Region must be rebuilt in two months.

He was speaking at the festivities on the occasion of the 2nd anniversary of the liberation of Slovyansk and Kramatorsk from pro-Russian militants.

He said he visited the Karachun Mountain where Ukrainian paratroopers held the line in July 2014. As a result f militants' barrage, the tower collapsed.

"They feared the TV tower transmitting the truth about the war the most. We agreed that the TV tower must be rebuilt in two months. No extra time from me," he said.

"It is the right of the people to the truth. And we must defend this right," he said. Poroshenko added that it applies to all areas of Donbas, including temporarily occupied territories.

He said Ukraine would not allow "information sabotage".

Ukrainian troops raised their flag above the tower in May 2014.