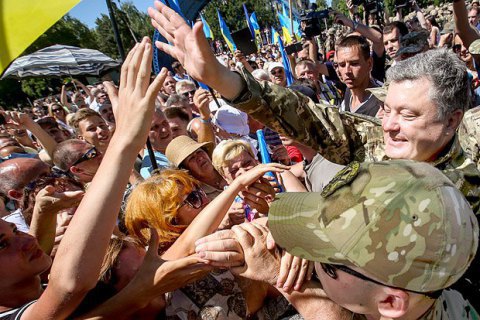 Ukrainian President Petro Poroshenko has attended the festivities on the occasion of the second anniversary of the liberation of Slovyansk and Kramatorsk, Donetsk Region from Russian terrorist troops, according to his official website.

He congratulated local residents and servicemen on the anniversary.

"Two years ago, as a result of a marvelous operation by the Armed Forces and Security Service of Ukraine (SBU) with support of the National Guard and other security units, Slovyansk and Kramatorsk were liberated. These cities have been outposts of the enemy in Donbas at that time and posed a constant threat to Kharkiv, Dnipropetrovsk and Zaporizhzhya regions," he said.

According to Poroshenko, international military experts commended the given operation: "It is extremely difficult to carry out an operation to restore Ukrainian sovereignty in densely populated localities with minimal casualties and destruction of infrastructure. However, our servicemen managed to do that and saved lives of people who found themselves in the area of hostilities".

“I would like to highlight the fact that the given success made Ukrainians believe in their defenders and. It also deprived the Russian aggressor of the illusion of a swift victory, a war in the style of entertaining walk,” he said.

He recalled that Ukrainian patriots had been tortured in the basements of Slovyansk during the occupation. "Those days became a pivotal moment in the fate and history of Slovyansk. At that time, Ukraine demonstrated to the whole world the determination of Ukrainians to defend freedom, democracy, independence, sovereignty and territorial integrity," the president said.

He noted that Ukrainian troops had liberated most of Donetsk and Luhansk regions. They would have liberated the rest of the territory if it hadn’t been for the direct invasion of Russian regular troops.

The president noted that the war "is not only success of failure, but also a painful loss of servicemen and civilians". He said that he could never forget the night when he had arrived in Kramatorsk after a "brutal and shocking" rocket attack on a peaceful city.

“It was a horrible example of true genocide unleashed by Moscow against Russian-speaking citizens of Ukraine," he said.

The attendees honoured the memory of servicemen killed during the defence and liberation of Donbas and civilians whose lives had been disrupted because of the attack of Russia on Ukraine.