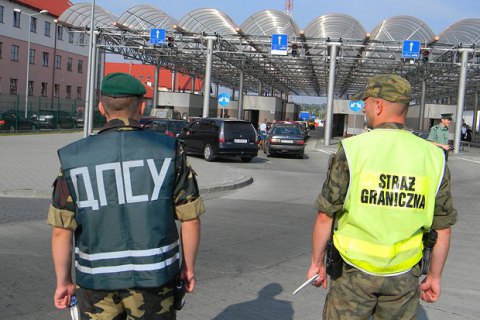 The State Border Service of Ukraine has said that currently the residents of areas on the Polish border have unblocked the Hrushiv checkpoint (Lviv Region), while Shehyni, Rava-Ruska and Krakovets remain blocked.

"At present, local authorities and the Ukrainian National Police by joining forces managed to find common ground with the locals and unlock Hrushiv checkpoint," a spokesman for the State Border Service, Oleh Slobodyan, said on Facebook.

"Awareness-raising activities are under way. Please, take this information into account when planning a trip to Poland," Slobodyan said.

"In order to minimize the possible increased tension on the border with the Republic of Poland, the State Border Service of Ukraine organized and keeps carrying out a set of informative and preventive measures. The State Border Service initiated creation of interdepartmental command staffs, together with representatives of local authorities carried out an explanatory work among the population of border areas. The procedure for cooperation with law enforcement authorities, control bodies in the case of the situation aggravation were also specified," the press service of border guard service informed.

As reported, on 4 July, small border traffic was temporarily suspended between Poland and Ukraine as regards entry and stay of residents of border regions of Ukraine on the territory of Poland, who have a permit issued by the relevant authorities of Poland.

The Polish side suspends the application of Part 1, Article 3 of the intergovernmental Agreement on local border traffic approved by the Cabinet of Ministers ruling No.139 (139-2009-p) dated February 25, 2009.

In accordance with this ruling, at the night of July from 3 to 4, 01:00 Kyiv time, Ukrainian citizens who were crossing the border with Poland with a special permit under the small border traffic will be able to cross the border only on a general basis and documents identified by the Polish side (passport and visa documents).

The Foreign Ministry explained that the agreement on local border traffic between Poland and Ukraine shall be suspended for less than one month. "According to the Ministry of Foreign Affairs of Poland, the suspension of an agreement is attributed both to the holding of the NATO summit in Warsaw on 8-9 July at the presidential level along with the world youth days," the spokesman of the Ukrainian Foreign Ministry Marian Bets said, noting that the agreement operation will be resumed on 2 August.

On Monday morning, traffic congestion at the checkpoints of the Ukrainian-Polish border was not fixed, but citizens blocked traffic close to a number of checkpoints.