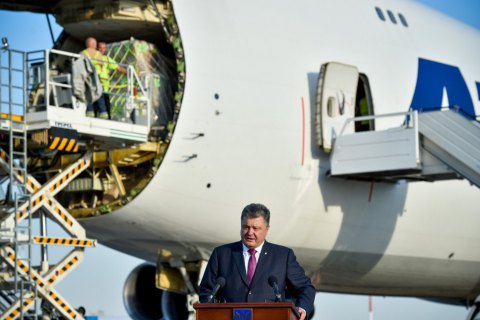 President Petro Poroshenko has called the transfer of US counter-battery radars to Ukraine on the eve of the NATO Warsaw Summit very symbolic, according to his official website.

"Peculiarity of our participation in this summit will be the fact that Ukraine will be the only NATO partner who will have a separate session of the Ukraine-NATO commission at the highest level. This also proves NATO’s high attention to Ukraine," the president said.

He emphasized that "the alliance resolutely supports Ukraine and condemns aggressive actions of Russia against our state".

"We will coordinate a complex package of aid following the Ukraine-NATO summit. The document will help us consolidate the existing directions of NATO's support and establish more efficient security and defense that will be reformed under the schedule of the Strategic Defence Bulletin," he said.

Poroshenko thanked US partners for counter-battery radars, decisive support in restoration of sovereignty and territorial integrity and liberation of the occupied territories. "I am also grateful for the policy of sanctions against the aggressor," he said.

The president emphasized that Ukraine was grateful to European partners for unilateral vote of 28 EU member-states in favor of continuation of sanctions against Russia until February 2017. "It provides additional opportunities and stimuli to bring Russia at negotiating table and ensure unconditional and full implementation of the Minsk agreements: security component, withdrawal of invader's troops from the Ukrainian territory, control over the occupied territories by the OSCE SMM, liberation of all hostages and unconditional ceasefire," he stressed.