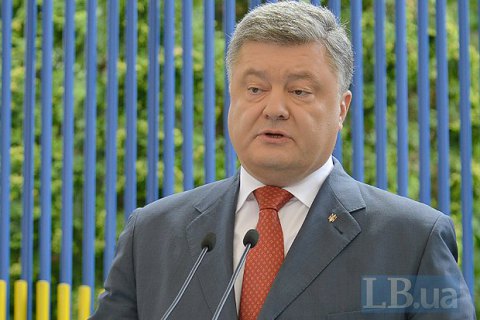 President Petro Poroshenko has said on Facebook that Russia's aggression against Georgia in 2008 was a "prologue" to the war against Ukraine.

"What was obvious only to the most shrewd people eight years ago is now to clear to all: Russia's aggression against Georgia was a prologue to the Russian war against Ukraine. The policy of pacifying the aggressor proved worthless back in 2008. What is more, it only whetted the Kremlin's appetite. Back then the trans-Atlantic community through joint efforts managed to contain the wild bear in its lair. This was a history lesson which we should have but have not learnt on time," he said.

Poroshenko went on: "Today Ukraine courageously holds the line on the eastern border of Europe. Because of the hard challenges, the feeling of friendship and solidarity between the Ukrainian and Georgian nations grew stronger. We like no other sincerely and consistently support the restoration of Georgia's territorial integrity. And it is clear that we will never recognise the Russian puppet regimes in Abkhazia and South Ossetia."

"Glory to Georgia and glory to Ukraine!" he concluded.

Russia attacked Georgia on 8 August 2008. South Ossetia's capital Tskhinvali was destroyed as a result of hostilities. Russia held an operation to coerce Georgia to peace. Russia recognised South Ossetia and Abkhazia as independent states on 26 August 2008.