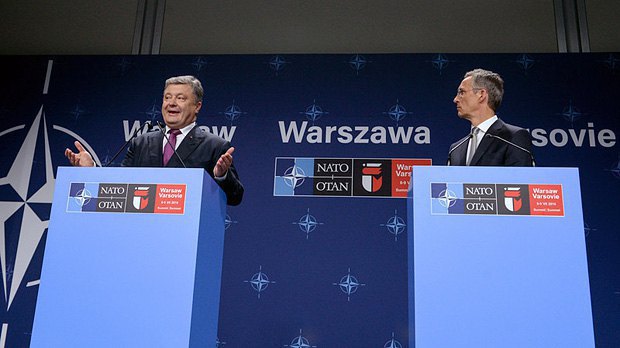 Photo: EPA/UPG
Ukrainian President Petro Poroshenko and NATO Secretary-General Jens Stoltenberg at the NATO summit in Warsaw, 9 July 2016
The Warsaw NATO summit marked the complete failure of Russian policy in the western direction. The worst outcome for Moscow would have been a decision to immediately include Georgia and Ukraine into the alliance: the deployment of "easily adjustable" missile defence systems near Kharkiv and a pair of US aircraft carriers in the Batumi harbour.

The economic situation does not look better: the price of oil is going down, Moscow has been unable to agree with the key suppliers. Neither it can pull out from Syria and leaving the puppet regime of "friendly" Bashar al-Assad without support. Without stopping the bombing of the camps of the Syrian opposition and civilian settlements, it will not be able to reach agreement with Al-Riyadh, for example.

The gas monopoly of Gazprom is bursting at seams. Contrary to all forecasts by pocket analysts, US shale gas, even taking into account the cost of transport and construction of liquefied gas terminals, proved to be quite competitive. The construction of South Stream, as well as the second stage of Nord Stream, is highly questionable. The era of Russia's gas domination and energy blackmail of Europe is coming to an end in front of our eyes. 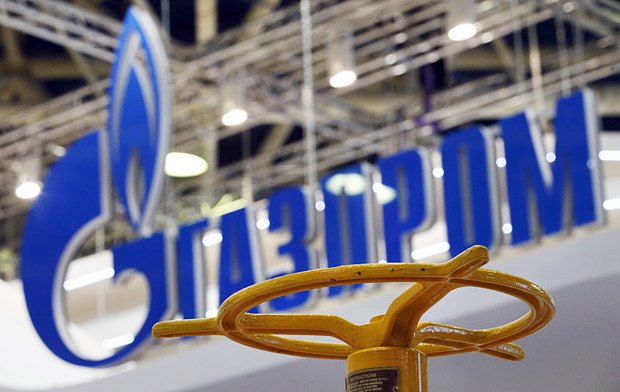 Two major nightmares of the Kremlin are taking all the more real shape: NATO missiles near Kharkiv and implementation of the Transatlantic Partnership programme.

Russia is looking for a way out in the south and east. Historical parallels always limp, but in terms of a foreign policy crisis, Russia traditionally rushes in this direction. Suffice it to recall the Crimean war, the war on Turkey in 1877-78, World War I, Afghanistan, and now Syria.

Moscow urgently needs a large-scale geopolitical project - to cover up for reputational losses in international affairs and mask the economic failures within the country. Putin was lucky once again: the foreign policy crisis and the failed military coup attempt in Turkey, a sharp cooling of its relations with the EU and the USA, the weakening of the army and democratic pro-Western public institutions as a result of repressions, its readiness for rapprochement with Russia are perfect prerequisites, from the Kremlin's point of view, to create a new anti-Western union and enhance its own international weight. In this case, the SCO was chosen as the basis for the next project of Eurasian integration. The previous projects - Eurasian integration and anti-Western consolidation based on BRICS did not bring any results.

The Kremlin is in a hurry: the Tashkent SCO summit has set the course for the expansion of the organization at the expense of India and Pakistan. It was decided to raise the status of Iran, which has been only an observer up until now. On 8 August, Baku will host the summit of Azerbaijan, Iran and Russia, the next day Putin will meet Erdogan in St. Petersburg. It's hard not to see the foundation of a new configuration in this, which is beginning to take shape right before our eyes. 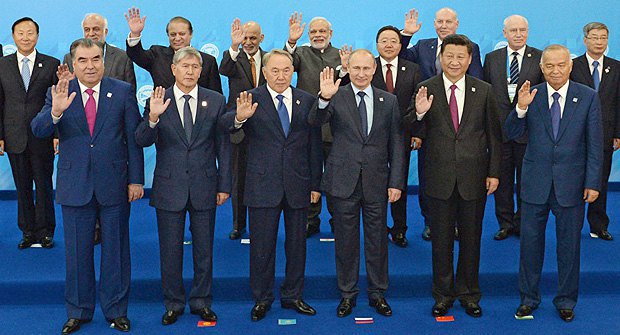 Photo: ru.sputniknews-uz.com
SCO leaders at the summit in 2015

Left aside was traditionally pro-Russian Armenia, which entrusted the "older brother" with care about its security, especially in deciding the Karabakh issue in its favour. Yerevan joined the "Eurasian Union" in the hope to ensure its own security and enlist Moscow as an ally in the face of Azerbaijan and Turkey which stands behind it and, in its turn, NATO which stands behind Turkey. Who could imagine that Turkey's policy of tension with Russia bordering on confrontation will switch to the anti-Western alliance with it?

Russian politicians, experts and mass media insist that the new configuration is of exclusively economic nature. However, fool me once ... Everyone remembers very well how the same assurances were heard in respect of the Eurasian Union and how the question of accession to the Customs Union led to Russia's trade wars against Ukraine and the basis of its blackmail, which ultimately prompted the Maydan, the Revolution of Dignity, the overthrow of Viktor Yanukovych, and all subsequent events which sent the Eurasian integration project to the dump.

In practice, Moscow tried to create a Eurasian Union on the model of the EU and as a counterbalance to the EU. Russia had the role not so much of the economic locomotive as the geopolitical centre, the regulator of political processes and the guarantor of nuclear security in the post-Soviet space. The events in Ukraine, annexation of Crimea, and hybrid warfare in southeastern Ukraine blew up the scenario which was unsustainable from the start. Economically, Russia has nothing new to offer, except for the supply and transport of fuel and energy. Politically, it turned from the guarantor of regional security into a threat to the established European world order. Energy blackmail was replaced by nuclear blackmail. 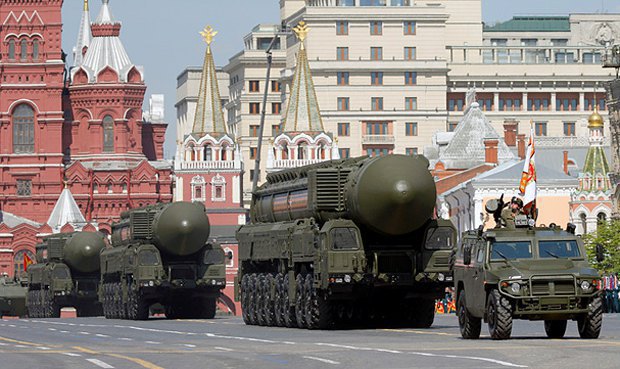 Photo: EPA/UPG
The military parade in Moscow on 9 May 2016

From the Kremlin's point of view, the format of the extended SCO + Iran + Turkey + Syria Bashar al-Assad looks very impressive. I think that it would be silly not to see in this configuration the outlines of a possible anti-Western coalition in the event of tough confrontation in the framework the essentially ongoing Cold War, and in the case of its development into a major regional or even global armed conflict.

There is little doubt that Baku will one way or another, voluntarily or involuntarily join this configuration, if it really takes shape. This does not bode well for Armenia, which remained alone and in direct geographical isolation. Neither for Georgia, which found itself faced with a powerful coalition amid formally uncertain relations with NATO. Not for the South Caucasus as a whole, which has a chance to become a regional powder keg.

How realistic is such a coalition

The contradiction between its members is in fact significantly bigger than within the EU and especially NATO. In this brief review, we can not analyse the foreign policy concepts and intricacies of real politics of such diverse states. Although it would be a relevant and good job for a team of experts. The weak point of all coalitions is in contradictions between its participants, the struggle for the leading position and possible dividends from victory.

Of course, this coalition can hardly be called monolithic. What immediately catches the eye is its traditionalism and anti-Westernism of its participants. Although from my point of view, the anti-Westernism (in particular, anti-Americanism in China) is strongly exaggerated by Russian experts, and this will inevitably lead to strategic mistakes in the short term. What is striking is how readily the Tashkent summit believed the promises of India and Pakistan not to bring their differences to the table of the SCO. What is it? Was it negligence on the part of experts, or the political will of the Kremlin at all costs to try and subjugate the major geopolitical players in South Asia? 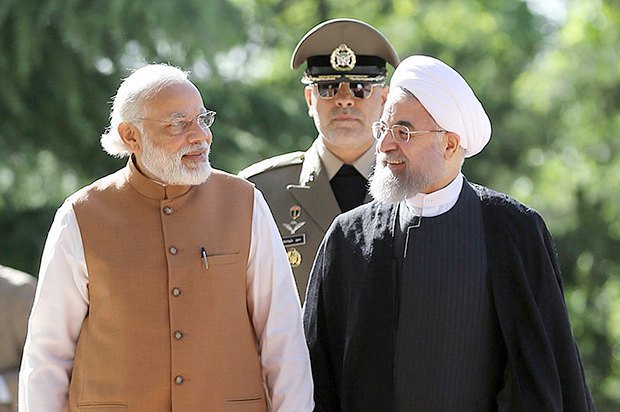 Photo: EPA/UPG
Iranian President Hassan Rouhani and Prime Minister of India Narendra Modi during a meeting in Tehran, 23 May 2016

A few words must be said about Iran. Its foreign policy may be described as "multi-vector", which makes it difficult to understand it. In this context, two factors should be identified: the protection of the interests of the Muslims and support for the "oppressed peoples" around the world in conjunction with the principle of the export of revolution are recorded in the constitution. Iran is pursuing a policy of destabilisation in Afghanistan, seeking to prevent the inclusion of its territory into the global scheme of transit routes. Moreover, Tehran has repeatedly said it will follow a political line independent of any external influences.

Here the Kremlin in this case prefers to hear only that Iran will not pursue a policy on the orders from Washington. It should be noted that the probability that it will do what Moscow wants is also negligible. It is also very important that Iran (and it is a well-known and proven fact in the West) directly supports a number of radical Islamist recognised terrorist organisations, as well as Al-Assad and Palestinian terrorists, which can be defined as "oppressed peoples" from Tehran's point of view. In this sense, the connection and alliance between Tehran and Moscow seem logical and even inevitable. However, after the lifting of sanctions, Iran now also has a pro-Western vector, and the internal situation there is hardly less tense than in Turkey. But Kremlin politicians do not care: they need a club for terrorist blackmail of the West here and now.

To this "multi-step course", Russia will now try to add the 9 August and Turkey, taking advantage of the crisis in which it found itself as a result of the extremely inconsistent policy of the recent years. I do not like such arguments, but what Erdogan and Putin have in common is the "offence" at the West and the United States. There are also some common traits in the social base of the two politicians. However, in reality these are absolutely not the factors that could form the basis of a long-term political union.

Apart from the "club", which is the basis for the imperial claims and geopolitical blackmail, Russia needs an alternative to South Stream as oxygen. It seems that the construction of the Turkish stream will become the main issue in the talks in St. Petersburg. In general, the "economic component" of the hastily cobbled-together coalition lies in the plane of the revival of the Silk Road. In spite of the traditional transit countries - Ukraine, the Baltic states and Poland, Russia wants to carry out a "great redistribution" of transit routes, moving them to the south. However, it is a huge and very unstable region, and the Kremlin has already demonstrated its inability to regulate the situation in the former Soviet Union, which makes for an easy forecast: such a political and organisational project is too much for it. 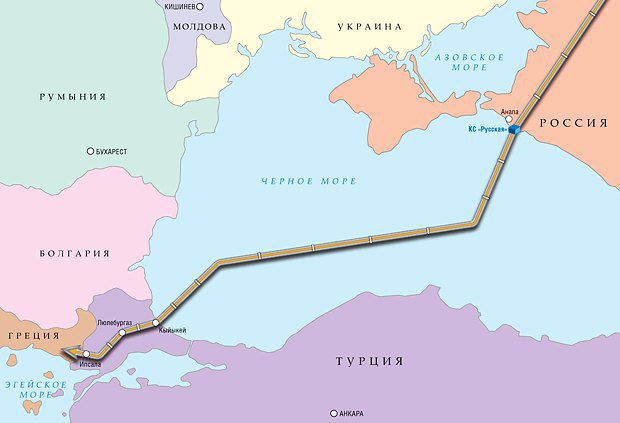 Photo: gazprom.ru
The planned route of the pipeline to be laid under the Black Sea from Russia's Anapa district to Turkey.

Of course, everything said above is nothing more than a hypothesis. As they say, the only purpose of this article is to register the trend. The contradictions within the emerging coalition can set it off in the air at the stage of laying the foundation, but it would be wrong not to notice the significant shifts in the southern part of the Eurasian continent. I believe that in the long run at least, China, Iran and Turkey use Russia in their own interests, leaving it in the long run once again in the role of the losing side.

Iran, for example, supports not only the terrorists who blow up European cities, but the Taliban, which terrifies Russia, and, what is important, the Islamic Renaissance Party of Tajikistan. Tehran does not conceal the fact that it sees its role in transforming this former Soviet republic into an Islamic state. Iran's certain activity of a similar fashion was observed in Kazakhstan too.

So, as the textbooks on scientific Communism used to say, "with the increasing complexity of management tasks, the role of the Party will steadily increase". However the current presidential administration and the Foreign Ministry is unlikely to be able to tackle these problems better than their historical predecessor of the Soviet Communist Party.