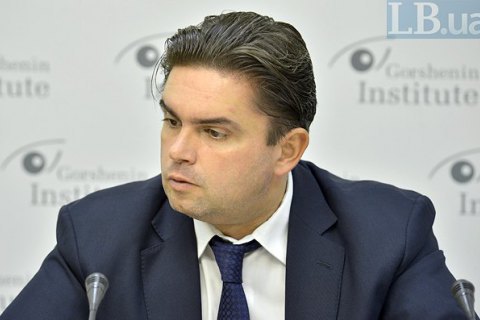 The probable cause of the murder of the leader of pro-Russian organisation Oplot Yevgeniy Zhilin were business schemes he was involved in, the advisor to the former chairman of the Security Service Advisor Markiyan Lubkivskyy said 21 September on Channel 112 Ukraine.

"This murder looks just as shady as shady and ominous was the role of Zhilin in the events on the Ukrainian east, in particular, in Kharkiv. Today we had a conversation with Valentyn Nalyvaychenko, and we both are inclined to lean to what, as I understand it, is the main version: ie the motives behind this murder were business transactions that Zhilin was involved in," said Lubkivskyy.

He recalled that 1.5 years ago the Kharkiv SBU department was after Zhilin's gang.

"He would pop up in Belgorod and then in Moscow. His is reasonably suspected and accused of financing terrorist activities... I think that people who are in one way or another engaged in criminal activities, and Zhilin was engaged in such activities, they tend to end up like this," said Lubkivskyy.

He said Zhilin was liaisoning between Russian special services and perpetrators of crimes on the ground, "It was about funding, armed attacks, explosions."

Yevgeniy Zhilin, 40, was gunned down in a suburban Moscow restaurant on 19 September by an unidentified attacker. Investigators have said the murder could be linked to a business dispute.

Zhilin was suspected and sought in a a number od criminal proceedings in Ukraine. In particular, Kharkiv region prosecutor's office charged him of laundering money through fictitious companies, and the SBU suspected him of the financing of terrorism. Prosecutor General's Office has said Zhilin was sought on suspicion of abduction, robbery, threat of murder and hooliganism during the Dignity Revolution.