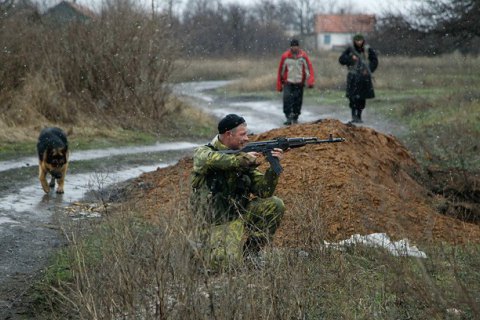 Over the past day, the Russia-backed separatists 14 times opened fire at the positions of the Ukrainian military in the zone of the antiterrorist operation in Donbass, the ATO press center said in a 22 September relaease.

In Donetsk sector, they attempted five attacks. The occupants fired rocket-propelled grenades, machine guns and small arms in Avdiyivka area, while Zaytsevo was shelled from a 120mm mortar.

In Luhansk sector, the terrorists led provocative fire from small arms. Ukrainian troops had to return fire in the area of Novooleksandrivka.

"Despite the provocations, the Armed Forces of Ukraine steadily adhere to Minsk agreements," the ATO release stresses.

The ATO headquarters report the activity of enemy drones

On Wednesday, 21 September, the Trilateral Contact Group on Donbass settlement in Minsk has signed a framework document on Disengagement of Forces in three sections of the conflict zone in eastern Ukraine providing specific coordinates for their relocation

The leaders of "Norman Quartet" are slated to meet soon to resolve the conflict in the east of Ukraine.