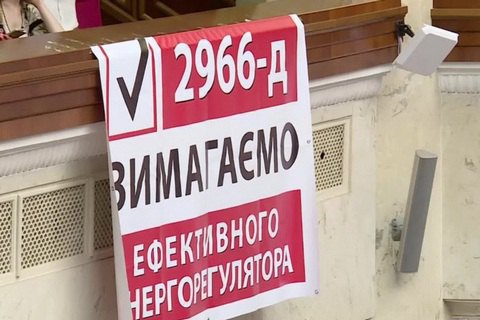 The Verkhovna Rada at the morning session on 22 September passed in the second reading and the whole a on an independent regulator in the field of energy and utilities.

The legislation was backed by 250 deputies at the minimum required 226.

The new bill provides that the current composition of the Commission will be gradually dismissed within 18 months (three, two and two members every six months). Members of the Commission, which will come to replace them will be handpicked by a tender committee consisting of five members (two appointed by the president, two by parliament and one by the Cabinet).

The adoption of the bill was a precondition of 600m euros macro-financial assistance to Ukraine by the European Union. Also, the ambassadors of the G7 and the European Bank for Reconstruction and Development have stressed the importance of adoption of the bill. The EBRD, in particular, said that independent regulator is needed for the privatization of energy companies.

The bill was approved on April 12 in the first reading. On July 14 it was considered in the second reading but was sent for amendment.