Scoop of the day: Klitschko set to win re-election bid

In 2015, the greatest number of residence permits in the European Union was issued to citizens of Ukraine, according to Eurostat. The Ukrainians hold the lead in this index of 499 992 permits for three consecutive years. On the second place are Americans with 261,760 cards, in the third place are the Chinese with 167,118 permits 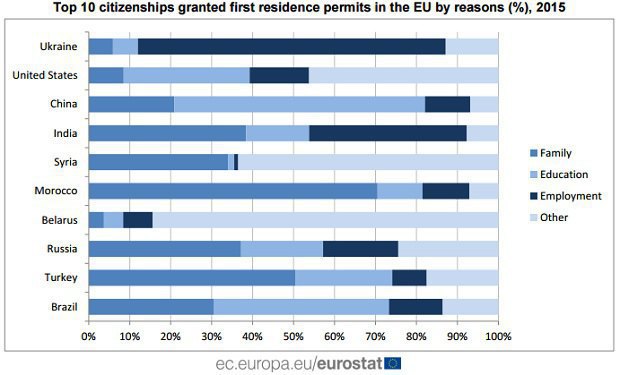 In total, EU countries have issued a record number of permanent residence permits in the last year since 2008 - 2.6 million, which is 12.1% more than in 2014. Every fourth residence permit was issued by the United Kingdom, one in five - Poland. Next in the number of permits issued goes France, Germany, Spain and Italy.

Ukrainians mostly received residence permits for the purpose of employment (75.2%), the Chinese - for education (61.2%), Moroccans - for family reasons (70.5%).

Ukrainians are mainly get residence in Poland (86%, or 430.1 thousand people).

In 2014, Ukrainians received 302.7 thousand residence permits in the EU.