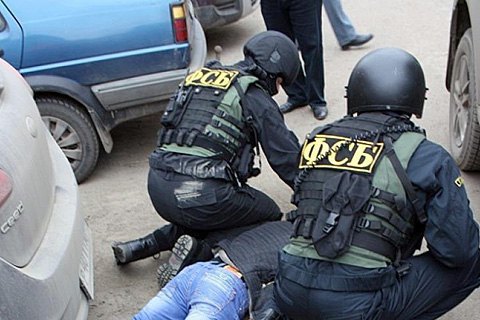 The Ukrainian Defence Ministry has denied the Russian Federal Security Service's (FSB) report that members of a sabotage and terrorist group from the Ukrainian Defense Ministry's Chief Directorate of Intelligence were detained in Sevastopol.

"In reality, the FSB did not detain any saboteurs because they are not present in Crimea and Sevastopol. Russian special services are trying to show their efficiency in such a way, once again misleading the supreme Russian leadership, the people and the international community," Ukrainian Defence Ministry spokesman Andriy Lysenko told Interfax on 10 November.

On 10 August, FSB announced the arrest of "Ukrainian saboteurs" who were allegedly preparing terrorist attacks in Crimea. The Ukrainian authorities have denied the charges and described the incident as provocation of the Russian special services.

Speaking to 112 Ukrayina TV, he said that by making up such stories, the FSB seeks "to prove itself effective, mislead the international community and discredit the Ukrainian Armed Forces".

The Media Initiative for Human Rights, a Ukrainian community on Facebook, released the names of the detainees: Oleksiy Besarabov, Dmytro Shtyblikov and Volodymyr Dudko.

Early on 10 November, Russia's security service, the FSB,said it had detained a Ukrainian "sabotage group' in Sevastopol, Crimea.

"The FSB on 9 November detained members of the terrorist group of the Main Intelligence Directorate of the Defence Ministry of Ukraine, who planned to commit acts of sabotage at military infrastructure and life support facilities on the Crimean peninsula," the FSB said.

The detainees allegedly had powerful explosive devices, weapons and ammunition, and special communication devices, as well as maps of the areas, where the acts were planned to be carried out.

Russian Interfax quoted a source as saying that three detained citizens of Ukraine admitted their guilt. It is alleged that the detainees were preparing "acts of sabotage at the power stations, water treatment plants and gas distribution networks of Crimea."