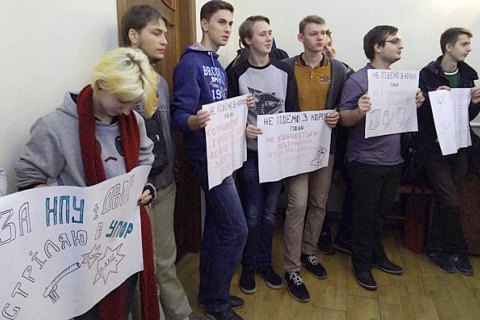 The students of Dragomanov National Pedagogical University in Kyiv have ceased their sit-in protest in one of the university buildings on Bulvarno-Kudryavska St. Student activists have occupied this room for six days to prevent it to be rented out for a furniture store, the head of the university's student council Lev Levytskyy stated on Facebook.

The university administration has officially confirmed the absence of contracts of rental of the property and pledged to heed to the opinion of students. The administration said that the previous tenant really moved out, leaving behind a debt of over 302 thousand hryvnya.

The university's Rector Viktor Andrushchenko promised that the room will be used for training and educational projects on a competitive basis. He also agreed to hold a public meeting with the students, which is slated to be held on the International Students' Day on 17 November in the assembly hall of the University's central building.

The student leader said the activists plan to vacate the seized premises by noon on November 10 and said they will continue the struggle by way of official inquiries and dialogue with authorities.