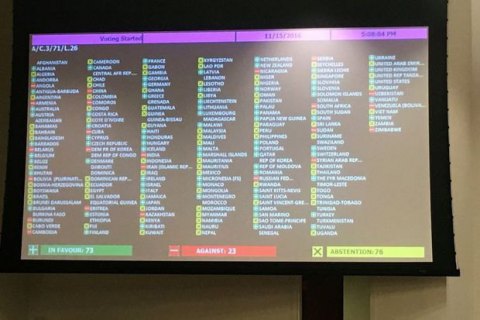 The General Assembly’s human rights committee on Tuesday, November 15 approved a resolution on "The human rights situation in the Autonomous Republic of Crimea and Sevastopol (Ukraine)", sponsored by Ukraine.

The delegations of 73 countries backed the resolution, 23 voted against and 76 countries abstained.

The document condemns abuses and discrimination “against the residents of the temporarily occupied Crimea, including the Crimean Tatars.”

It calls on Russia to release Ukrainians who were illegally detained, and to allow cultural and religious institutions to reopen. And it urges Russia to immediately revoke the Supreme Court’s September 29 decision declaring the Mejlis of the Crimean Tatar People an extremist organization.

The document Russia to immediately end all abuses against Crimea residents including “arbitrary detentions, torture and other cruel, inhumane or degrading treatment, and to revoke all discriminatory legislation.” The document calls on the Office of the United Nations High Commissioner for Human Rights to prepare a separate thematic report on the situation on the Crimean peninsula.

The draft resolution was co-authored by 41 member states of the United Nations.

The mission of Ukraine to the United Nations stressed in reports that it was the first time in official documents of the United Nations recognizes the Russian state as occupier, and describes Crimea and the city of Sevastopol as temporarily occupied territory.

U.S. deputy ambassador Sarah Mendelson said “Russia wants to make sure only one voice is heard in Crimea - Russia’s.”

“States should not have to fear that a neighbor, however powerful, will seize their territory,” she said.