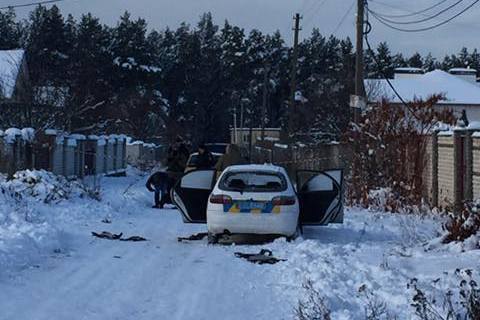 Five police officers were killed on Sunday night in Knyazhychi, a village near Kyiv, in an erroneous shootout between police units.

An adviser to the head of the Interior Ministry, MP Anton Herashchenko, described the circumstances of the tragic incident:

"The criminal police of Kyiv were conducting a special operation to detain a dangerous gang of burglars that have systematically robbed private homes in Kyiv and Kyiv area. On Saturday night, the CID received operative information that another robbery could occur in the village Knyazhychy near Kyiv. A CID detention group reinforced by a special force unit KORD rushed to the scene.

Police intelligence officers, whose main task was to monitor the situation were deployed in in a newly built private house to monitor the situation and give signal [to the main unit] to start the detention operation. At that time, a burglary alarm went off in a neighbouring house, and a unit of State Guard Service, police who provide private security services on contractual basis, arrived in the scene, spotted two police intelligence officers and detained them.

Apparently, the tactical squad thought that their intelligence officers got captured by criminals and rushed in a van to the street where the State Guard Service held the police officers they have detained. In a shootout between the units that lasted a few moments, five law enforcers were killed," he wrote on Facebook.

Among the killed were two State Guard Service employees, two police officers and a member of the KORD.

Meanwhile, three suspected robbers, who were supposed to be caught on the scene, heard the gunfight and drove in two 4WDs in the direction of Kyiv. They were arrested by operatives with firearms in their possession and detained. They will be charged of burglary and armed robbery," Herashchenko wrote.