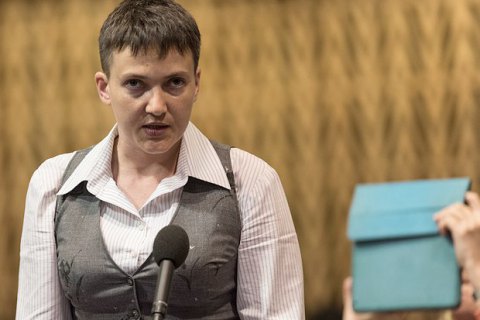 The news website said its report is based on information from three sources.

The meeting was allegedly organized by the Russian Federal Security Service (FSB) with the assistance of the Russian embassy in Belarus.

One of the sources told LIGA.net that Savchenko and the separatist chieftains discussed efforts on how to mount pressure on the Ukrainian authorities to make them negotiate with the DPR and LPR directly. Their meeting was attended by FSB representatives.

Hostages' families are expected to play a role in mounting the pressure on Ukraine.

On Sunday, 11 December, Savchenko took part in a conference on hostages held by pro-Russian militants in Donbas. Confronted by LIGA.net on her secret visit to Minsk, she said: "I did not come here to answer your questions." When asked again, she said: "Was not I clear the first time?"

She was asked the same question again by a different journalist at the conference. Savchenko again refused to answer and then raised her voice on the journalist.

LIGA.net suggested that the FSB is trying to organize an exchange of hostages in the way that would make it look as a result of direct negotiations between Ukraine (represented by Savchenko) and the "legitimate authorities of Donbas" represented by the separatists.

Back in June, Savchenko spoke in favour of direct negotiations with the DPR an LPR.