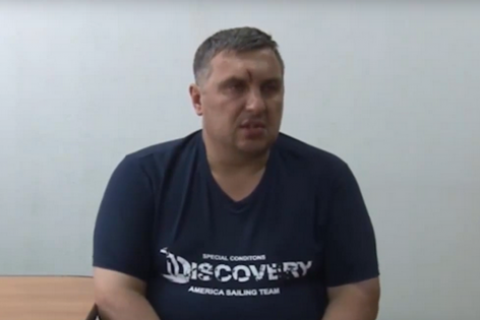 Ukrainian national Yevhen Panov arrested by the Russia-controlled Crimean authorities in the case of the so-called "Ukrainian saboteurs" has complained to the Russian Investigations Committee about torture, according to Mediazona.

He said that when he was crossing Ukraine's administrative border with Crimea, he was asked to step out of the car for inspection. At the entrance to a container office he was hit on the head with a blunt object. "I fell and felt that I was lying in a puddle of my own blood," Panov said in his statement. Near the container office, he saw several masked persons. They put a thick sack on his head, put him on the car floor and brought him to some place where he was kept until the evening.

All this time, he says, he was tortured. "They beat me with an iron pipe in the area of the head, back, kidneys, arms, legs, they pulled handcuffs so tight behind the back that my hands went numb, they hanged me by the handcuffs: they bent my legs and fastened the handcuffs just below the knees, put an iron rod in the crook of my legs, after which two men holding the rod from both sides lifted me, which was extremely painful," he said.

"Also, during the torture, they put a loop on my penis and pulled it tight until it went blue. In the meantime, the men were asking me: "Who have you come to blow up?" I could not answer this question because I had no such goal and I could not understand why they think so," he said.

Later they took him out with the sack on his head and "told me that they will shoot me down". "I thought it was true because I heard how they racked the slides." When they took the sack off his head for a little while, he could see his two torturers, men of about 35 years old. Panov says he can identify them.

At around 9 or 10 in the evening of 7 August, they put the sack back on his head and took him to another place by car. "When they brought me by car presumably to Simferopol, they led me into some building and continued to torture while the sack was still on my head: they tape electrodes from an electric shocker to each knee and the waist, and turned power on, as a result of which I blacked out several times. They poured water on me to bring me back to senses. I had chipped lips because of electrocution." All this time he was kicked and beaten.

Panov thinks he had been tortured until 9 August. "I remember they stopped at noon and brought me, with the sack on, to some place, as I later understood, it was court." In court, he was made to open his eyes and ordered to sign a document. "I don't know what I signed," Panov said. Afterwards, he was taken to a courtroom where he saw "a woman in civilian clothes" and a man "who, as I learnt later, was Andriy Romanovych Zakhtey."