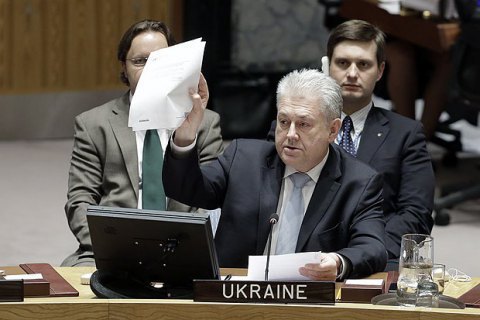 The Ukrainian delegation to the UN has initiated a discussion at the UN Security Council on the situation in Georgia due to Russia's decision to form a combined force in Abkhazia, Ukraine's permanent representative at the UN, Volodymyr Yelchenko, has said in an exclusive comment to LB.ua.

"Since the Russian president has signed the law on the ratification of the so-called agreement with the Sukhumi regime on the creation of a combined force, the Ukrainian delegation on 6 December initiated a discussion at the UN Security Council on the situation in Georgia," he said.

According to Yelchenko, in the course of consultations the Ukrainian and other delegations condemned Russia's actions which constitute an attempt to legitimize the illegal deployment of Russian troops on the occupied territory of Georgia. It was pointed out that Russia blatantly violates its international commitments, in particular the cease-fire agreement reached on 12 August 2008.

"Also, Ukraine called on the Russian Federation to withdraw its armed units from the occupied territory of Georgia to ensure that international security mechanisms are put in place in Abkhazia and Tskhinvali Region and Georgia's territorial integrity is restored," Yelchenko explained.