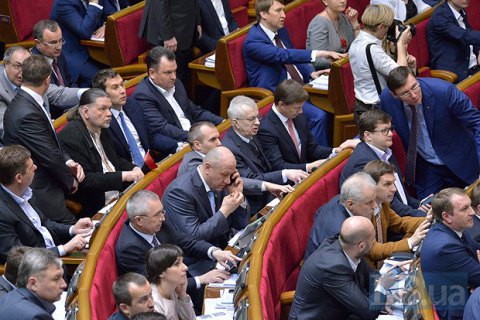 At its evening session on 6 December, the Ukrainian parliament passed bill No 5130 required for the 2017 state budget to be approved. It was supported by 227 MPs.

Social Policy Minister Andriy Reva earlier said that the bill increased the minimum wage to 3,200 hryvnyas (122 dollars). In his words, it will also allow to unblock a merger between social insurance funds.

At the same time, the bill contains a number of controversial regulations. In particular, it keeps the maximum pension capped at 10,740 hryvnyas until 31 December 2017 and continues to restrict pay to working pensioners.

It introduces social (for those who require state assistance) and academic (for those with high achievements in education) scholarships. However the clause saying that at least two thirds of students of one year should be paid academic scholarships was dropped.

To check social benefit recipients, the bill partially waives their right to personal data protection: the authorities will receive access to information on insurance record, insurance cases and sums of received payments.

Currently, the minimum wage is 1,600 hryvnyas.