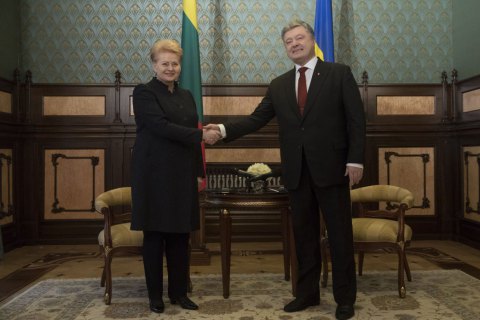 Several documents on expansion of bilateral cooperation between the states have been signed in the presence of President of Ukraine Petro Poroshenko and President of Lithuania Dalia Grybauskaitė who is on a working visit to Ukraine, according to Poroshenko's website.

Poroshenko and Grybauskaitė also made a joint statement on the occasion of the 25th anniversary of bilateral diplomatic relations.

"Ukraine and the Republic of Lithuania have officially gained the level of strategic partnership. Our states have been demonstrating a permanently high dynamics of political dialogue, effective practical interaction in political, economic, scientific, technical, cultural, and humanitarian spheres, active cooperation on the issues of implementing the Ukraine-EU Association Agreement, and Ukraine’s course towards European and Euro-Atlantic integration," the statement reads.

The sides condemned the occupation of Crimea and the city of Sevastopol by the Russian Federation and its aggression in Donbas.

"We call on the international community to continue active political, diplomatic and other efforts for restoring Ukraine’s territorial integrity in its internationally recognized borders in the interest of stability and security of the entire Europe," the two leaders said.