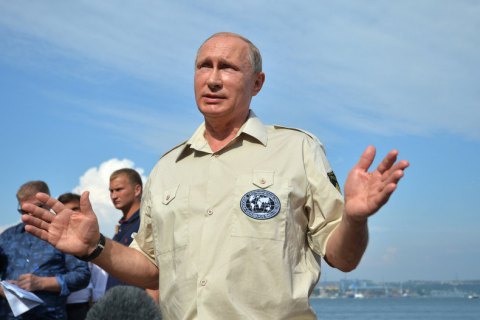 Russia has linked the occupied peninsula of Crimea to its gas transportation system. Gas supplies from the mainland are expected to start in the near future, Russian President Vladimir Putin told his final press conference of 2016.

"[Russian State Unitary Enterprise] Chernomorneftegaz has finished works to link the Crimean gas transportation system to the gas mains of the Russian Federation. In the next two or three days we will announce the completion of works and start of supplies of Russian gas to Crimea," Putin said on 23 December in Moscow.

According to Putin, the supplies of Russian gas will in the long term perspective allow building two power plants in Crimea to make the occupied peninsula energy-independent from Ukraine.

Before the occupation, Crimea consumed 1200-1300 MW of energy, 800 MW of which were supplied from the [mainland] Ukraine.

Earlier, Ukrainian Chernomornaftogaz said that Russia annually extracts about 2bn cu. M. of gas on the Ukrainian shelf of the Black Sea that was illegally seized, together with the peninsula of Crimea.