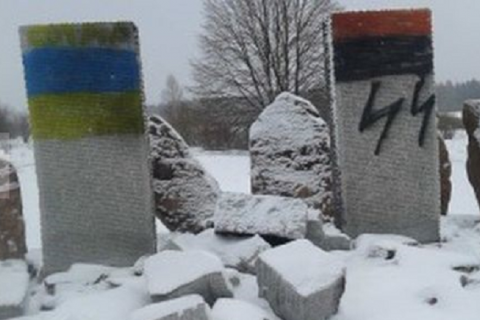 Unknown persons have destroyed and vandalised the monument to Poles exterminated by Nazi troops in 1944 in the village of Huta Penyatska (Huta Pieniacka) in Lviv Region on 9 January.

A deputy chairman of the Brody district administration, Volodymyr Adamets, told Zaxid.net that law enforcers and regional authorities are investigating the act of vandalism.

The website noted that the Russian news agency Regnum was the first to report on the incident. The video with the vandalised memorial daubed with nationalist graffiti was immediately posted on a newly created profile on Youtube.

The head of the Ukrainian Institute of National Remembrance, Volodymyr Vyatrovych, described the incident as a "provocation aimed to aggravate the Polish-Ukrainian relations, playing into the hands of a third party."

"The monument, opened in 2009, not only commemorated the residents of the village who died in 1944, but was also a symbol of the participation of third forces in fueling the conflict between our peoples. Huta Penyatska was a Polish village destroyed by German occupiers because of the provocations of a detachment of Soviet partisans deployed here. The Nazis deliberately sent police units composed of Ukrainians to participate in a punitive operation," Vyatrovych wrote on Facebook.

Vyatrovych stressed that the damage of the monument is not only similar to the recent acts of vandalism at Ukrainian cemeteries in Poland, but has the same goal of fuelling a "war of monuments".

"The desecration of graves and monuments on both sides of the border must spark equally strong condemnation in both countries both from governments and civil society," he said.

Of least 14 acts of vandalism against monuments and Ukrainian graves in Poland, none was disclosed in 2014.