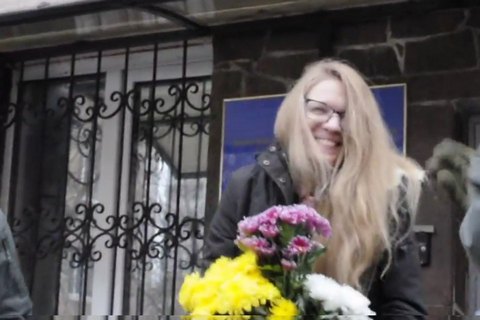 Viktoriya (Vita) Zaverukha, one of the suspects in the case of the attack on a filling station and the murder of two police officers, who was detained in May 2015, has been released on the bail of 1.6m hryvnyas (59,000 dollars) paid by businessman Oleksiy Tamrazov, her lawyer has said.

Masked individuals attacked a filling station in Kyiv on 4 May 2015. They wounded a staff member in the arm and took around 800 hryvnyas from the cashier. During the chase and shoot-out, two police officers and one of the robbers, Vadym Pinus, were killed.

Police detained four suspects: Andriy Romanyuk, Mykola Mnyshenko, Yevhen Koshelyuk and Danylo Sytnykov. Viktoriya Zaveruha, 19, was detained later over her connections with the detainees. She was not directly involved in the attack but allegedly help the malefactors to carry arms.

All the detainees were Euro-Maydan activits and fought in the antiterrorist operation against pro-Russian militants as volunteers.