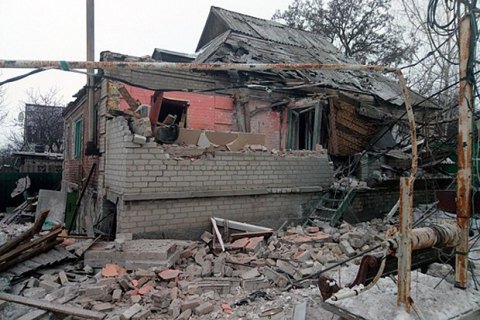 The Russia-backed militants pounded Avdiyivka with four Grad mutliple-launch rocket systems at about 6 a.m., the Ukrainian Defence Ministry's spokesperson said during a televised appearance on 31 January.

"People in Donetsk saw the shooting attacks from four different angles, four different military facilities. Shells hit the old part of the town. The town is burning. There are victims among the civilian population," the spokesperson said.

The casualties are being specified, he said.

The chief of police of Donetsk Region, Vyacheslav Abroskyn, wrote on Facebook that a man was injured as a result of the shelling at around 5 a.m. He was taken to hospital.

Avdiyivka is the hottest spot along the line of contact, the antiterrorist operation (ATO) HQ has said. On the morning of 31 January, the militants fired over 80 Grad shells on the city's residential neighbourhoods. They also fired around thirty 152-mm artillery shells and used 120- and 82-mm mortars, tanks and small arms.

At night, the enemy made another attempt to storm the positions of the ATO forces. The attack was repelled.

Three Ukrainian troops were reported killed, 20 wounded and four injured by the enemy shelling on 30 January.