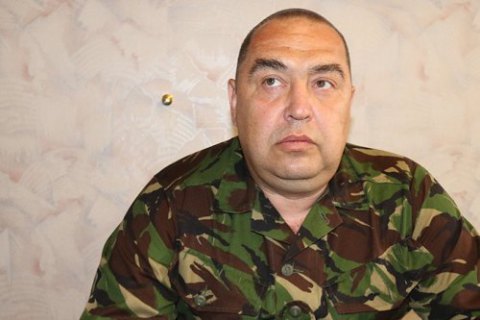 The prosecutor's office of Dnipro Region has sent to court an indictment against the leader of the self-proclaimed Luhansk people's republic (LPR), Ihor Plotnytskyy, and his two aides in the case of the IL-76 military transport aircraft downed near Luhansk in 2014.

"The head of the terrorist organization LPR, I. Plotnytskyy, who at the time of the crime was the commander of the illegal armed formation Zarya, together with his deputy A. Patrushev and the commander of the illegal armed formation Vityaz A. Gureyev are accused of downing the [Ukrainian] military transport aircraft IL-76, which was carrying 49 people, during the landing at Luhansk airport," the prosecutor's office said in a statement on 30 January.

The suspects are facing the charges of an act of terrorism.

This is the second case against Plotnytskyy sent to a Ukrainian court. Since October 2016, Kyiv's Podilskyy district court has been hearing a case against him in absentia on charges of the abduction of Ukrainian officer Nadiya Savchenko.

On 14 June 2014, 49 people were killed in the downing of IL-76 above Luhansk airport. The LPR militants claimed responsibility for the downing immediately after the incident.