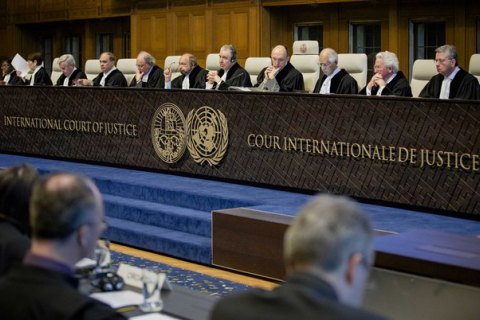 The Russian side in the International Court of Justice in The Hague says that the events in Eastern Ukraine were caused by "overthrow of government" and "revolution" that took place in Kyiv.

The director of the Legal Department of the Ministry of Foreign Affairs of the Russian Federation Roman Kolodkin representing Russia at the trial has on more than one occasion stressed the thesis about a "bloody coup", "violent coup" and "overthrow of power" in Ukraine.

Kolodkin denied that there were grounds for the Revolution of Dignity, emphasizing that all the problems have been artificially created by politicians.

The real problem was created by the opposition in Ukraine who said that Ukraine should either cooperate with Russia or with the EU, Kolodkin claimed.

Russia's representative expressed confidece that the key task of the new Ukrainian government was to deprive the Russian language of official status. It should be noted that in fact no language had the status of official in Ukraine, but some languages, including Russian, had regional status in certain regions.

Nevertheless, the representative of the Russian Federation assured the International Court of Justice that the "coup" has triggered the military conflict in Donbas.

"All of this has led to a civil war in the East of Ukraine," he said.