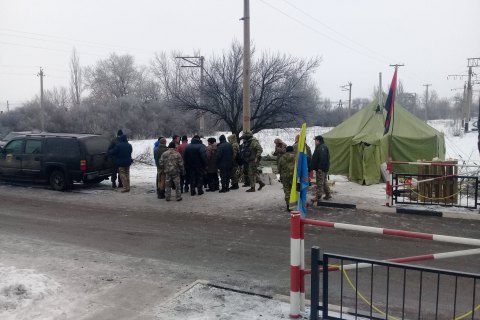 The so-called HQ of the Blockade of Trade with Occupiers has said its "redoubt" of the 16th volunteer battalion in Kryvyy Torets, Donetsk Region was stormed by the officers of the Security Service of Ukraine (SBU) and the special police force KORD on 13 March.

Previously, it was reported that a group of SBU operatives arrived in Kryvyy Torets, disarmed the blockade members and detained them.

UPDATED: The Antiterrorist Centre has confirmed the detention of 43 persons.

"During the countersabotage measures in Toretsk, Shcherbynivka and Kurdyumivka (antiterrorist operation area), SBU employees detected a group of people carrying arms and other destruction means. Their refusal to hand their guns to police was a reason to detain 43 persons, the AC told Interfax-Ukraine.

Law enforcers confiscated "many arms and a significant number of petrol bombs".

In January 2017, public activists led by several MPs organized the so-called trade blockade of the self-proclaimed "D/LPR". The participants have blocked three railway branches linking the occupied territories with mainland Ukraine. The posts they installed on two highways do not block traffic but perform "monitoring and supervisory functions."

The blockade interrupted the supply of anthracite coal from the uncontrolled territories to Ukraine and provoked an emergency situation in the energy sector.

The DPR and LPR militants took advantage of the situation to seize control of Ukraine-registered industrial enterprises and companies located on their territory.