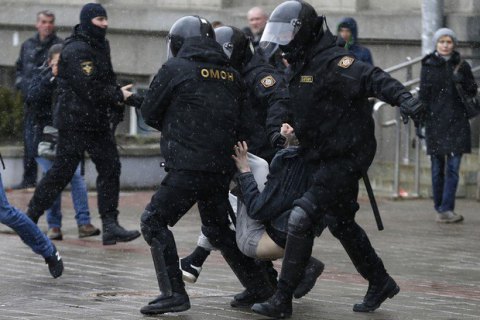 Another Ukrainian citizen has been detained in Minsk for participation in the mass protests on Belarus's Day of Freedom on 25 March, the head of the consular department of the Ukrainian Foreign Ministry, Vasyl Kyrylych, told Hromadske Radio on Tuesday, 28 March.

"According to preliminary information, another Ukrainian citizen is in custody in the Minsk detention centre, and as of 17:00 Monday he is yet to be served a court indictment," Kyrylych said.

The diplomat said Ukraine had sent a note to the Belarusian Foreign Ministry to request full and objective information about the reasons and circumstances of the detention of Ukrainian citizens.

According to the Belarusian human rights group Viasna (Spring), about 120 protesters were brought to courts in Minsk on Monday, 27 March. Interfax reported that judges mostly punish them with fines of different amounts and administrative arrests from four to 25 days.

Previously, it was reported that a court in Minsk arrested Ukrainian citizen Ruslan Tereshchenko for 15 days. He was detained for participation in the 25 March rally in Minsk.