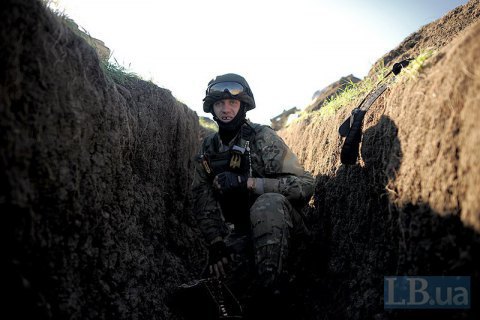 The situation in the area of the anti-terrorist operation in the ATO zone remains tense but controlled. Over the past day, Russian-occupation troops 61 times fired at the positions of Ukrainian servicemen, injuring three soldiers, the ATO press center reported on Facebook Wednesday, 29 March.

The Donetsk sector, remains the hottest spot with the center in the areas of Avdiyivka and Troyitske where militants shelled the positions of Ukrainian military with 120-mm and 82-mm mortars. In the areas of Kamyanka, Krymske and Luhanske, the enemy used 120-mm mortars, and pounded Opytne with 82mm mortars.

The positions of ATO troops near Avdiyivka, Pisky, Nevelske and Opytne were also shelled with the grenade launchers of various systems and heavy machine guns. In the areas of Luhanske and Krymske the enemy employed IFV armament.

In the Mariupol sector, militants shelled Taramchuk and Krasnohorivka with 82-mm mortars and fired grenade launchers and heavy machine guns at Vodyane, Pavlopil, Lebedynske and Krasnohorivka. Anti-aircraft systems ZU-23-2 were employed opposite Shyrokyne.

Enemy snipers activated in the vicinities of Hnutove and Vodyane.

"The ATO opened return fire In order to suppress the enemy's fire," the report says.

On Tuesday, two ATO fighters were wounded in Donbas.