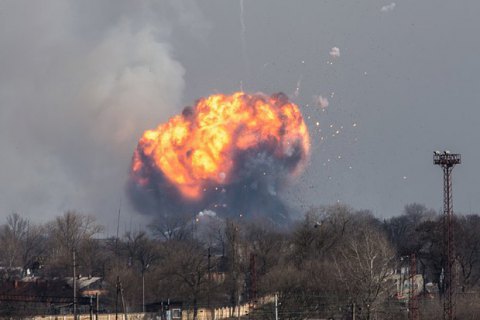 According to preliminary estimates, the losses from the explosions and fire at the armoury in Balakliya, Kharkiv Region has amounted to about 220m hryvnyas (8m dollars), the chairman of the Kharkiv regional council, Serhiy Chernov, has said as quoted by Interfax-Ukraine.

Taking into account the losses of industrial enterprises, the amount can reach 300m hryvnyas.

"The total losses will be known after specialists complete the estimates... Also, agricultural producers have been affected as well because shells also fell into their fields," the report said.

According to Chernov, documents are being prepared to request that the government allocate funds from the regional development fund for repairs. Funds may also be disbursed from the reserve fund of the regional budget.

A fire broke out on the territory of Ukraine's largest arms depot in Balakliya, Kharkiv Region in the early hours on Thursday, 23 March. It caused the detonation of 125-mm tank and 152-mm artillery shells. Military prosecutors suspect this was an act of sabotage.

Around 20,000 people were evacuated from Balakliya and neighbouring villages.

As a result of the accident, an elderly woman was killed and two others were injured.