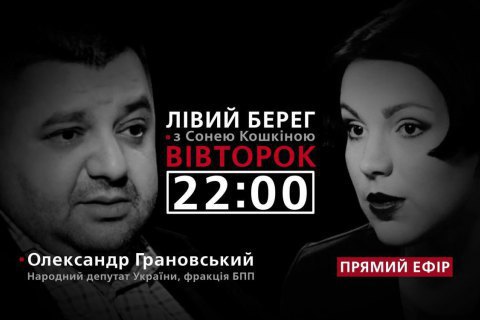 A year ago, unknown to the general public but very influential in narrow circles, Petro Poroshenko Bloc (PPB) member Oleksandr Hranovskyy gave an interview to LB.ua, during which he demonstrated deep involvement not only in inner-party processes, but also in the processes related to government.

Prosecutor-General Yuriy Lutsenko indirectly confirmed Hranovskyy's political scale when he confirmed that the MP is a close friend of the "right hand" of President Petro Poroshenko (Ihor Kononenko), who arranged for his meeting with Cypriot security officials in the Prosecutor-General's Office (PGO) probe into the offshore schemes of some people's deputies.

On what has changed over the past year, the internal situation in the faction, which found itself virtually without a leader, the progress of judicial reform and many other things, Oleksandr Hranovskyy will talk to Sonya Koshkina on her Left Bank talk show on Channel 24.