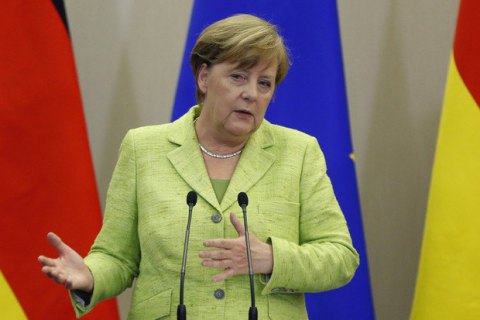 There is no need for a new agreement in the framework of a peace settlement in Ukraine, the Chancellor of Germany Angela Merkel said.

"I do not consider it expedient to conclude a new agreement," she told a news conference on the results of her talks with Russian President Volodymyr Putin on Tuesday, Interfax-Ukraine reports.

Merkel said she was dissatisfied with the growing tendencies of the separation of the eastern regions of Ukraine.

"The expropriation of enterprises, the transport blockade, and other issues must be studied very thoroughly, and everything possible must be done to reverse this," Merkel said.

"Of course we want to make sure Ukraine gets access to its national border, which is also part of the Minsk Agreements, before securing a political resolution aimed at conducting local elections," Merkel said..

"We have not achieved this yet, but this does not mean that we can forget about the existing agreement and must move on to concluding a new agreement," added the Chancellor of Germany.

She said there was no need to conclude a new agreement on Ukraine but to fulfil the effective agreement and asked the Russian president "to do everything possible to ensure its implementation".

Merkel said that she would like to lift the anti-Russian sanctions after the implementation of the Minsk agreements, noting at the same time the presence of contacts between Russia and Germany in the economy and a number of other spheres.

Merkel also called Russia a constructive partner in organizing the G20 summit in Hamburg in July.

"The events in the world show that multilateral cooperation for the benefit of all is exactly what we need, and in this spirit we will continue to work," the German Chancellor said.