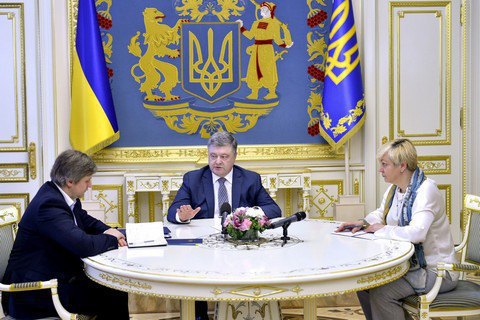 President Petro Poroshenko during a meeting with the Minister of Finance Oleksandr Danyluk and the Chairman of the National Bank of Ukraine Valeriya Hontareva on Wednesday discussed the transfer 1.1bn dollars to the accounts of the State Treasury. He said the transaction took place in accordance with the court's decision to confiscate the funds of the entourage of the former President Viktor Yanukovych. Another 199 million dollars in securities will be transferred to the Ministry of Finance to reduce the internal debt of the state.

"As of now, no complaints have been filed against this decision, and no so-called owners put claims to this money," the head of state said as quoted by his official website. Poroshenko stressed that the decisive actions of law enforcement agencies and the court's decision helped restoring justice in this matter.

"[The confiscation] has not just increased the capacity of the state budget and the Ukrainian state to restore justice and invest these funds in the Ukrainian army, strengthen the nation's defence capacity and restore social justice by channelling these funds to the protection of the least protected segments of the population. These funds will also add to gold and foreign exchange reserves of the state, increasing it to 18.4bn," Poroshenko stressed.

On 28 April, Prosecutor General Yuriy Lutsenko announced to the press that the ruling of Donetsk Region's Kramatorsk district court on the confiscation of 1,5bn dollars belonging to the entourage of the former president Yanukovych came into force.

The funds were confiscated in the framework of the verdict in the case of Serhiy Katshkin, ex-CEO of the Gas of Ukraine-2020 owned by Serhiy Kurchenko.

Kramatorskyy district court ruled on March 28 to approve a deal on recognizing the plea bargain between Serhiy Kashkin and the military prosecutor of the ATO forces Kostyantyn Kulyk.

The funds were confiscated from the accounts of Oschadbank and Privatbank.