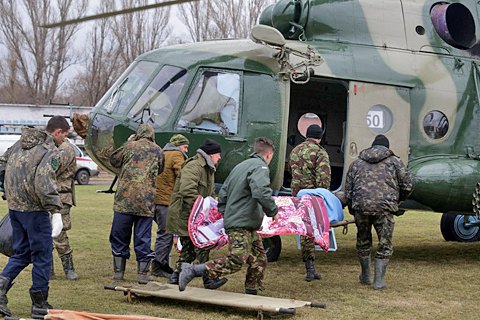 Five Ukrainian servicemen were wounded as a result of 16 attacks by pro-Russian militants in Donbas on 20 May, the antiterrorist operation (ATO) HQ said in its evening update.

Militants used heavy artillery in the Luhansk and Donetsk sectors. They fired with 120-mm mortars and at noon with 122-mm artillery, small arms and grenade launchers on the Avdiyivka area.

They used 152-mm artillery and 120-mm mortars near Troyitske and Novozvanivka.

On the Svitlodarsk salient, militants fired on Novoluhanske with infantry fighting vehicles and near Zaytseve with 82-mm mortars.

They used heavy machine guns near Verkhnyotoretske and Stanytsya Luhanska.

In the maritime (Mariupol) sector, they targeted Shyrokyne and Lebedynske with machine guns and small arms, and Vodyane with grenade launchers.

Seven servicemen were wounded in Donbas as a result of 55 shooting attacks by the militants on 19 May.