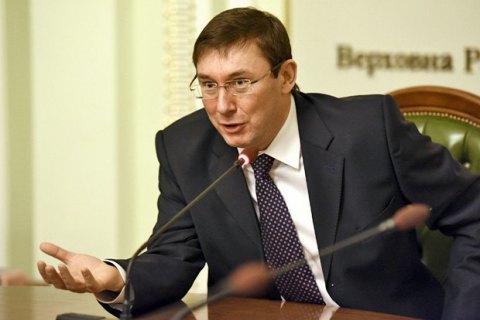 Photo: Yuriy Lutsenko's press office Prosecutor-General of Ukraine Yuriy Lutsenko expressed confidence that the trial of the fugitive President of Ukraine Viktor Yanukovych will be open to a maximum.

"I hope that this court will be further held in an open format for all, unlike the trials of myself, Tymoshenko and other opponents of that government. I guarantee that Yanukovych's rights will be protected," Lutsenko stated on the 'Left Bank with Sonya Koshkina' talk show on 1 June.

The chief prosecutor assured that any legitimate requests of Yanukovych's defence team will be fully granted.

"Any court must adhere to humanity principles," said Lutsenko.

He declined to prognosticate, however, when the preliminary decisions in Yanukovych case may be announced.

"Surely, I would like the first decisions to be made as soon as possible, but it depends solely on the parties to the lawsuit. My task is to find evidence, formulate the indictment and objectively support the state prosecution at the trial," said Lutsenko.

As reported, the meeting in Yanukovych's case was postponed to June 16 "due to the fatigue and loss of voice" by the defence lawyer.

Earlier, the lawyer said that Yanukovych opposed the consideration of his case by a jury.

Yanukovych is charged of committing an act of high treason by applying on 1 March, 2014 with a written request to the president of the Russian Federation to use Russian troops on the territory of Ukraine.

Subsequently, this led to the loss of Crimea by Ukraine and objects of state property worth more than 1,080 trillion hryvnia.

The prosecution will seek a life sentence for Yanukovych.