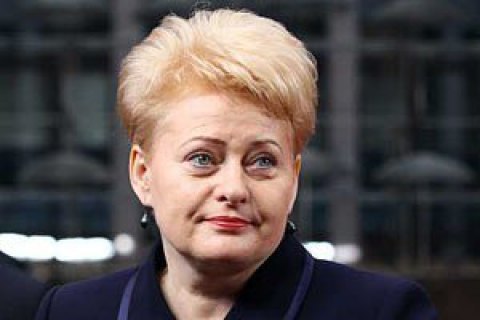 In particular, she said that the Russian-Belarusian exercise West-2017 (Zapad 2017) is part of the Kremlin rehearsals of the scenario of an attack on its neighbors.

"Today, the focus is on North Korea and some other regions. However, Russia uses the same methods of intimidation, harassment and aggression in Ukraine, and along its eastern borders with NATO nations. Right at this moment, about 100,000 Russian troops are taking part in the military exercise West-2017 where the Kremlin is rehearsing attacks on its neighbors. They train their troops for an attack on the West," Grybauskaite said.

"This exercise is just another sign that the Kremlin cannot overcome its hatred of the West, the president of Lithuania said. In addition, such exercises are part of the information war, which aims to spread uncertainty and fear."

"Despite a special responsibility that is imposed on the Russian Federation - the protection of international peace as a permanent Security Council members - Russia is violating the UN Charter. It has invaded Georgia, illegally annexed Crimea and is directly involved in the war in eastern Ukraine," the president stressed.

Grybauskaite warned that the Kremlin's arsenal is not limited to conventional weapons.

"Russia continues to interfere in the conduct of elections, waging cyberattacks, uses [propaganda resources like] all kinds of Sputniks for the dissemination of fake news and destabilization. Such energy of blackmail has become a long-sanding choice of Russia," she stressed.

Earlier in the day, French President Emanuel Macron called at the Ukrainian General Assembly of the United Nations for an effective ceasefire in Ukraine.